Underwater hunting is quite popular and well developed in Crimea; about 3000 persons are dealing with it constantly, of them about 1000 were members of different public professional organizations. At present time the Interregional public organization “Crimean and Sevastopol Underwater Association” (CSUA) has been created by initiative of underwater hunters. It is created on the base of earlier existing several organizations in Sevastopol (“Extreme”, “Aquaticus”) and in Crimean cities Yalta, Simferopol, Yevpatoria, Kerch. The association unites fans of sport and amateur underwater hunting, freedivers and other kinds of underwater sports. One can get acquainted with the Status of Association and with different forms of its activity on site http://apdks.ru . Organization of collaboration with scientific institutions is one of directions of the Association activity.

The Agreement on scientific – technical cooperation has been signed between Institute of biology of the southern seas (IBSS) and CSUA; organization of monitoring investigations of the coastal ichthyofauna with participation of underwater hunters, supply of samples of new and interesting for ichthyologists fish species, sampling of hydrobionts, bottom sediments for laboratory studies, information on peculiarities of distribution of fish, crustaceans, mollusks etc are the main points of this Agreement.

It should be noted that by the beginning of 1990-ties there was a group of divers in the staff of IBSS, who were specialized in sampling, underwater observation of distribution of species composition and abundance indices of benthic and big forms of plankton hydrobionts and fish. Some of these divers are now members of this Association. For many years there exists fruitful cooperation between some researchers of IBSS and underwater hunters. For example for more than 15 years Sevastopol underwater hunters gave me personally their hunt trophies; as a rule they were new for the Crimean coastal zone fish species and exemplars abnormal by size or morphology. They gave also information about peculiarities of behavior, distribution, migration of rare and usual fish. Tens of scientific and scientific – popular articles and monographs, accessible not only for wide circle of specialists but also for all those who are interested in the sea life have been written on the base of such data.

In June 2014 at the meeting of MR OO CSUA we addressed underwater hunters with a request to organize voluntarily gathering of information on the results of regular underwater observations; for this researchers of IBSS A. Boltachev, E. Karpova and members of CSUA I. Tamoykin, V. Kuleshov worked out special Questionnaire and distributed it between underwater hunters. The main demand for this Questionnaire – reliability! If the information obtained was doubtful it was corrected under private talk with the author, after which such information either was accepted or excluded. The second condition – “Seen does not mean caught”.

Questionnaire includes general information about hunter and his underwater experience, 28 fish species – objects for underwater hunting near Crimean shores and rare, needing protection fish, like sturgeon, the data on occurrence of which is very important are listed in this document. For all the fish they point in this Questionnaire frequency of registrations and abundance, as well as availability of fry and adult specimens. They give features of behavior, if possible – length and mass of specimens and other moments of possible interest. All the coast of Crimea was subdivided into 8 regions.

Questionnaire is presented with results of one month observations, but first one included the data of one year observations – from July 2013 to June 2014. Form of the Questionnaire is attached. The results obtained were above all expectations. 41 Questionnaires were received, their results are under processing at present time. But preliminarily registration of occurrence of such new or rare for Crimea commercial species as Sparusaurata, Sarpasalpa, Dicentrarchus labrax, Umbrina cirrosa. In June 2014 we received information about first finding near Sevastopol coast of Dentex dentex and more often cases of findings of big form of Black Sea horse-mackerel Trachurus mediterraneus ponticus? of 30 – 40 and more cm length. At present time Questionnaire are coming from underwater hunters with results for July 2014.

On August 2 in Feodosiia there took place workshop of leaders and members of CSUA and underwater hunters from Feodosia region with participation of IBSS representatives A. Boltachev and E. Karpova; as a result local underwater hunters agreed to conduct this monitoring.

The results of these investigations are of great scientific and practical importance, used for:

It seems reasonable to implement monitoring of the state of the coastal zone ichthyofauna with attraction of voluntary divers and underwater hunters in other Black and Mediterranean seas countries. We have no information about such monitoring investigations in the world practice. 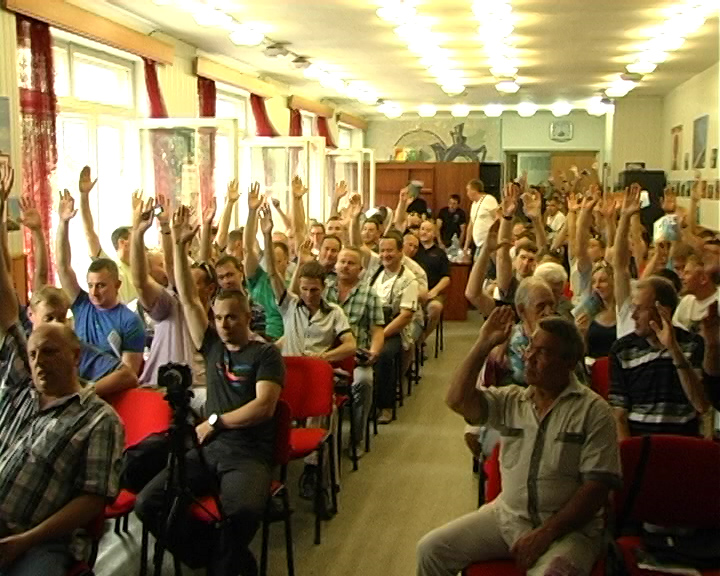 Meeting of underwater hunters of Sevastopol and Crimea, which worked out decision about organization of the Crimean and Sevastopol Underwater Association (CSUA),June, 2014 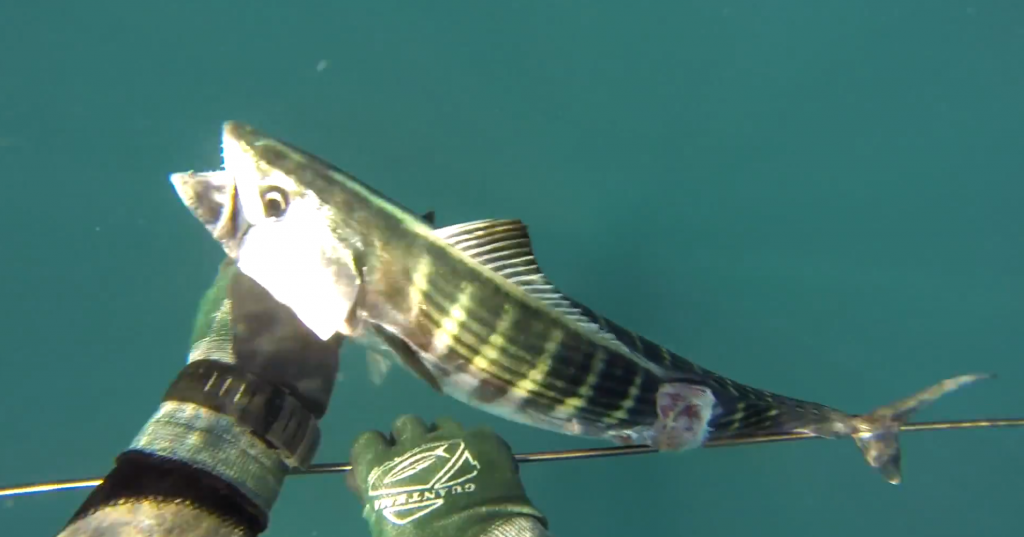 The last years the cases of registration and catches of bonito Sarda sarda near Crimean shores became more often. 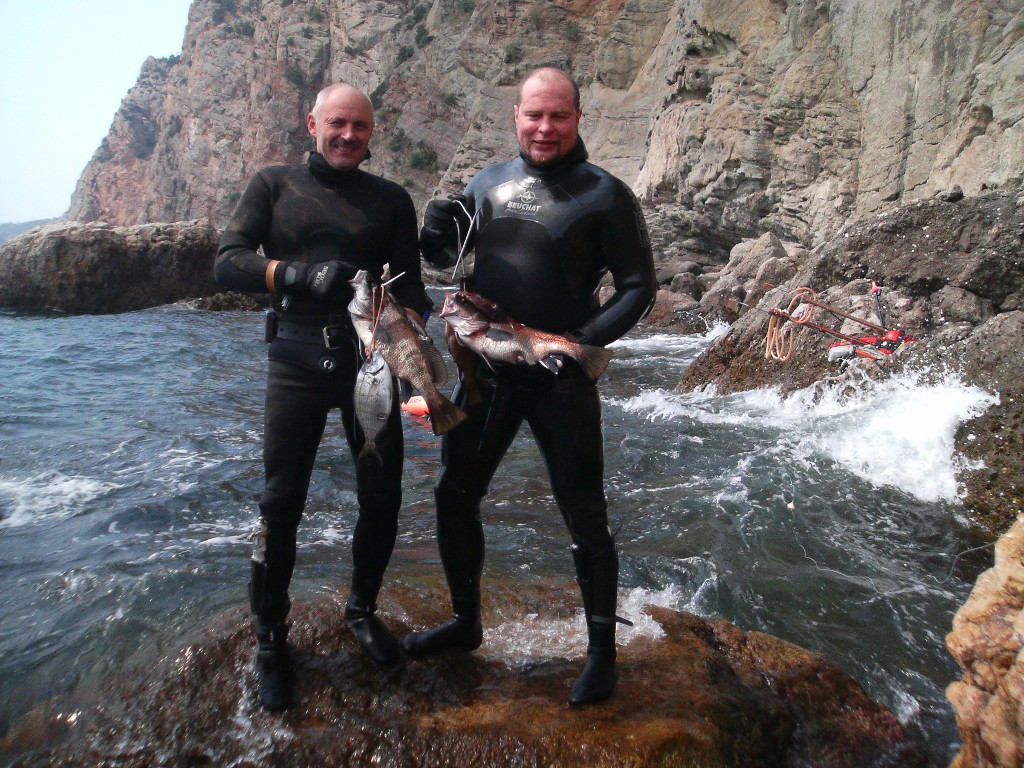 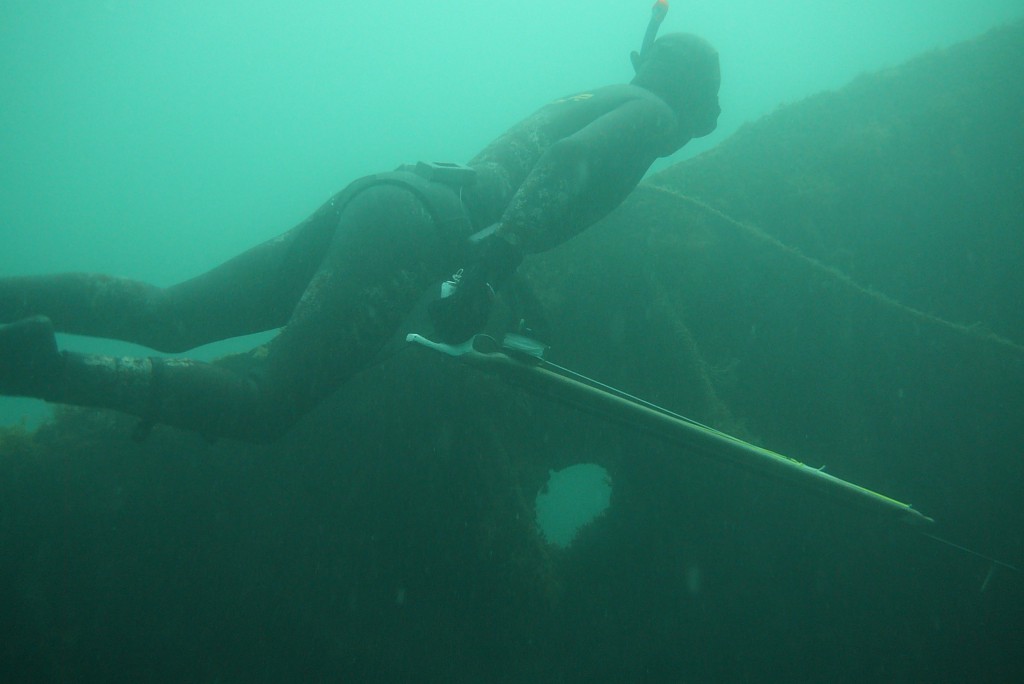 Underwater hunter near Cargo-ship “Gruziya”, which has sunken during the Second world war as a result of bombing attack of German aviation. 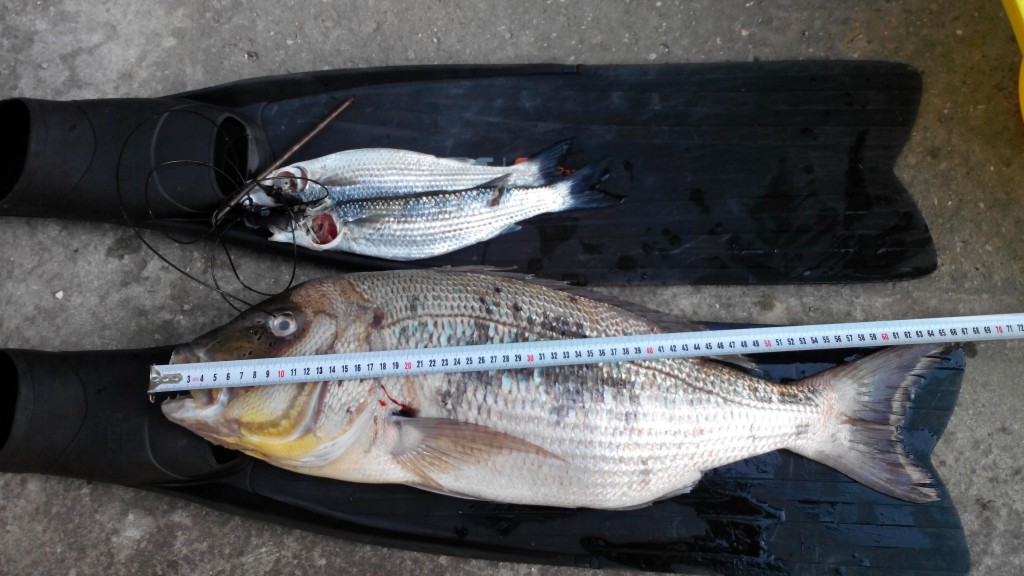 The first finding of Dentex dentex near Crimean shores, June, 2014; this specimen has been caught by underwater hunter B. Popov and given to IBSS. Information about this catch will be soon published in the Marine Ecological Journal. 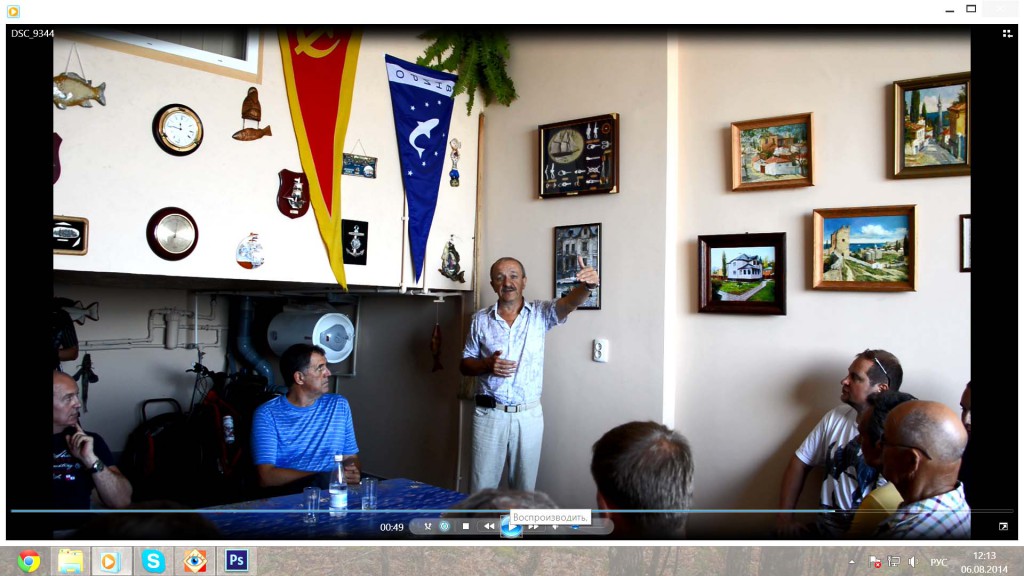 Workshop of IBSS and CSUA representatives with underwater hunters of Feodosiia, August, 2014